Skip to content
Posted inUncategorized
Posted by By Sparki December 8, 2020No Comments

cross-posted from Afflict the Comfortable

On December 7th, 1975, Indonesia invaded East Timor, the first step in what would become a brutal 24-year occupation in which it would kill over 210,000 East Timorese, over 30 percent of the population, with significant U.S. support throughout the entire period.

Up to April 1974, “Portuguese Timor” was a colonial outpost of the central government in Lisbon, but then the left-wing “Carnation Revolution” occurred and Portugal withdrew its administrators and troops from East Timor (and Mozambique and Angola). West Timor was under Indonesian control.

With Portugal gone, East Timor saw a surge of political activity, with the conservative Timorese Democratic Union (UDT) and the Leftist Revolutionary Front of Independent East Timor, or Fretilin established first, with Fretilin more popular among the Timorese, much to the dismay of neighboring Indonesia and Australia, as well as the United States.  The two parties did enter a coalition in early 1975, but the UDT accused Fretilin of turning East Timor into a communist front and the agreement fell apart in August.  At that point, the UDT began to forcibly take over radio stations, internal communications, transportation hubs, and the police, and it began a civil war against Fretilin, which appealed to East Timorese military forces that had been trained by Portugal.  With those reinforcements Fretilin forced UDT troops into West Timor and seemed to be in control of East Timor…..but that would soon change.

East Timor lay at the southern tip of the archipelago of Indonesia and Fretilin was clearly a target of the brutal Suharto regime in Jakarta.  Indonesian government and military officials saw  East Timor as a threat now, despite being small and significantly weaker militarily.

Fretilin, they feared, might inspire secessionist movements within other Indonesian provinces—the “threat of a good example”—and Timor could become a base for other Communist states which could potentially threaten the sea lanes used by the west in the Indian and Pacific Oceans and the South China Sea.  In addition to what Jakarta saw as the negative example of an independent East Timor, Indonesian government and commercial leaders also believed that there might be abundant reserves of oil and natural gas under the Timor Sea (there weren’t), and Suharto hoped to become a closer military ally to Washington in the aftermath of the Vietnam War.

Jakarta’s message about the “threat” of Fretilin met responsive ears in Australia and the United States, which was looking to maintain a presence in the region after its defeats in Indochina. American President Gerald Ford and Secretary of State Henry Kissinger supported the plans to crush Timorese independence and offered aid.  In September 1975, Indonesian special forces thus began incursions into East Timor, with conventional military assaults, and even the executions of five Australian journalists, within a month.  With that as prologue, Indonesian forces attacked and invaded East Timor on December 7th, 1975. Indonesian naval forces bombarded the capital of Dili as paratroopers landed and engaged East Timorese military forces, and by noon had taken control of the capital.

Days later a second wave of Indonesian forces captured Baucau, the second biggest city, and by Christmas another 15,000 troops were in East Timor.  By April 1976, that number had risen to over 35,000, with another 10,000 in Indonesian West Timor ready for reinforcement.  Inside East Timor, Indonesian troops began wholescale slaughter (not unlike they had done after the 1965 coup that deposed Sukarno), with reports of rape and assassinations of women and children and ethnic Chinese as specific targets.  The Bishop of Dili described “soldiers who landed started killing everyone they could find. There were many dead bodies in the streets – all we could see were the soldiers killing, killing, killing.”

Though the Indonesian forces were causing massive bloodshed, East Timorese forces had moved into the mountainous interior and conducted a guerrilla campaign that lasted throughout 1976 and early 1977.  At that point, the Indonesian navy had purchased armed patrol boats and submarines from the U.S., Australia, the Netherlands, South Korea, Taiwan and West German, and 13 Bronco aircraft from Rockwell International with military credits from the administration of Jimmy Carter. Jakarta send another 10,000 troops in to conduct what Indonesian officials called the “final solution.”

Indonesia’s final solution involved encircling and annihilating villages and mountainous hideouts, while defoliating the ground cover and causing widespread famine.  When villagers fled and moved out of those areas, Indonesian forces just massacred them.  In some cases, entire villages were killed, with allegations of chemical weapon use common.  By 1978, the resistance was finally quashed, at a massive cost in human life among the East Timorese.  Australian Prime Minister Malcolm Fraser was the first head of state to formally recognize Jakarta’s annexation of East Timor, though both Canberra and Washington had been on board from the start of the invasion.

While the invasion was ongoing, reports of the atrocities and a famine reached the outside world, and even became the subject of congressional hearings in the United States.  While critics alleged that the U.S. “looked away” as Jakarta killed tens of thousands in East Timor, the reality was more stark.  In fact, the Carter administration provided heavy support—military, financial, diplomatic—to Jakarta.  Indonesian troops in East Timor “were armed roughly 90 per cent with our equipment,” the Department of State acknowledged.  As they ran out of military materiel with their escalating operations, Carter authorized additional arms sales of $112 million for 1978, and Vice-President Walter Mondale visited Jakarta to announce new arms sales.  Throughout, the Carter administration denied that the situation in East Timor was dangerous.

Congress, led by Representative Donald Fraser of Minnesota, conducted hearings on the Indonesian invasion and famine and Carter officials denied that the situation was even serious.  In March 1977, American officials Robert Oakley and the renowned Richard Holbrooke told congress that the White House had accepted Indonesia’s  annexation by Indonesia and that “allegations” of atrocities were “greatly exaggerated.”  When a former Australian Consul to East Timor, John Dunn, testified about the “brutal operations” that had already killed perhaps 100,000 Timorese along with rape and torture, a state department official, David Kenney claimed that the Indonesian forces were “maintaining a defensive posture,” that “there was no ‘search and destroy operation,’” and that the Timorese “can move about” the country at will.

While Indonesia, Australia, the United States and most of the world whitewashed Jakarta’s crimes in Timor, there were outsiders who brought the crisis to the attention of the world, as a small guerrilla resistance continued to fight against Indonesia throughout the 1980s and 1990s.

While the United Nations passed resolutions in 1975 and 1976 calling for Indonesian withdrawal and recognizing East Timor’s right to self-determination, Jakarta, and virtually every other western state,  just ignored them.  By the late 1970s, largely due to the efforts of the journalist Arnold Kohen and activist Noam Chomsky, as well as Fraser’s efforts in congress, some Timorese refugees were brought to the U.S. to meet politicians, journalists, and human rights groups.  More attention, and support, was given to East Timor throughout the 1970s and into the 1980s but it still existed mostly on the margins of the Left. By the end of the Reagan administration, East Timor was becoming a bigger issue, and 182 house members and a group of senators sent letters to the White House demanding an inquiry into human rights abuses by Indonesia.  Reagan increased arms sales to Jakarta.

The Santa Cruz Massacre (or Dili Massacre) of 1991 marked a major turning point in the public campaign for East Timor. Indonesian forces found resistance leaders in a church and killed Sebastião Gomes, a pro-independence activist.  During a memorial service for Gomes on November 12th, over 200 Indonesian soldiers opened fire at the graveyard and killed over 250 East Timorese in a massacre that was witnessed by western journalists and camera crews.

Jakarta called it a “misunderstanding,” but the international outcry over East Timor grew exponentially. In early 1998, beset by political scandals and an economic crisis, Suharto resigned and that helped give  East Timor more political space. In 1999, almost 80 percent of East Timorese voted for independence in a national referendum and ended 24 years of brutal Indonesian occupation—supported and paid for in part by Australia and the United States—and centuries of colonial rule by Portugal. 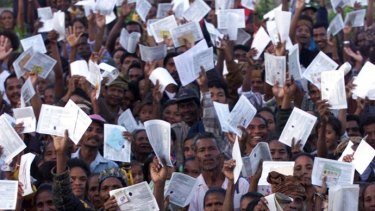 And at Swarthmore’s NVDA Database: https://nvdatabase.swarthmore.edu/content/us-activists-campaign-support-east-timorese-independence-movement-1991-1999

This is a Green and Red history moment. To get more G&R, check out www.greenandredpodcast.org

Sparki
Scott Parkin is a Senior Campaigner with Rainforest Action Network and organizes with Rising Tide North America. He has worked on a variety of campaigns around climate change, the wars in Iraq and Afghanistan, mountaintop removal, labor issues and anti-corporate globalization. Originally from Texas, he now lives in San Francisco.
View All Posts

“Meeting People Where They Are At” with Alex from Laborwave Radio

No comments yet. Why don’t you start the discussion?